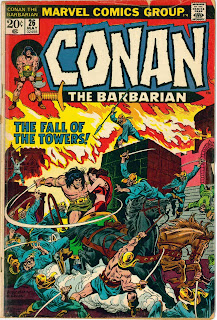 An Interest is Born
My introduction to Conan The Barbarian came in 1973 thanks to Marvel Comics. Stan Lee and his comic empire have enriched the lives of many over the decades and I am certainly not alone. I had read many other comics prior to discovering Conan The Barbarian, with stories based on history and weird horror tales among my favorite. The above pictured Conan comic opened a new chapter in my reading interests. To be brief, reading Conan The Barbarian comics lead to the Savage Tales and Savage Sword magazines, and eventually to the collected Conan stories edited by L. Sprague DeCamp and published by Lancer/Ace in a cheap paperback form that was affordable even to a teenager of the 1970's. 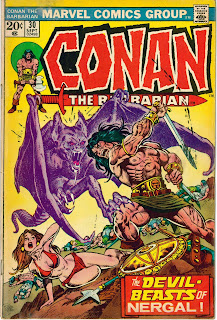 I happened onto Conan The Barbarian in the middle of a multiple issue Roy Thomas adaptation of the story Hand of Nergal, which I later found in one of the Conan volumes edited by Mr. DeCamp (Lin Carter authored the short story Hand of Nergal from a Howard fragment). Drawn by John Buscema and Ernie Chan the images I found in those early issues of Conan The Barbarian helped me to imagine the world of Conan. The dynamic action depicted in those illustrations of course appealed to my teenage restlessness. The 1970's was a long-hair decade (my favorite band was Led Zeppelin) and the long black main of the Conan character made him someone I could identify with.
The Hand of Nergal story involves a decadent monarch manipulated by evil advisers, a captive princess, and demonic forces not meant for human understanding - all tropes that would form the impressions I have of swords & sorcery and fantastic adventure. My infatuation with heroic fiction, swords & sorcery and high adventure stories taken from Conan comics and pulp era fiction primed me for the next step to come, adventure gaming. 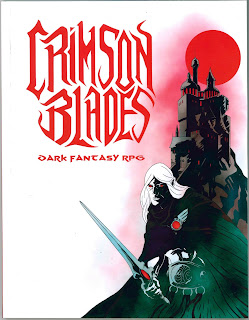 Four to five years later I had joined the ranks of growing D&D enthusiasts, thrilled to be playing out some of the ideas that I borrowed from those comics and stories. However you come to this hobby, whether through the stories involving a certain dark elf ranger or through a green-clad digital avatar, those early experiences probably continue to influence what you enjoy. My preference for dark fantasy and grim tales has continued to this day. Fortunately I have found many games that focus on the kind of stories I enjoy best. Through the hobby I have also met other players who share my interests and many have become life-long friends. That is a lot of value from a 20-cent comic.
Posted by Fred Daniel at 12:35 PM