Start Small
One of the primary joys of being a referee or judge in a game is the design aspect where the game becomes a creative outlet. Creating a scenario, drawing maps, building a world, these are creative pastimes and the excitement and satisfaction of sharing my creation with others is a big part of what has kept me involved in the hobby for 40+ years.
The sandbox is my favorite method of world building. The term "sandbox" in adventure gaming refers to a setting where players can explore and interact with the imaginary world through maps, dialogue with the referee and the application of game/campaign rules. A referee map and good mental concepts of most aspects of the world is all that is really needed to get started. At first, the map can be of a relatively small area.
Remembering how far a group of adventurers can travel in a few days will inform the referee about how many miles ahead need to be planned. I usually like to have a vague idea of the "bigger picture" map so that NPCs may talk about the sea over there, the mountains that way, etc., but spending time drawing detailed maps of areas the players may never any show interest in can be wasted effort, effort better spent on thinking about the nature of your world - what kind of climate does it have?; what creatures inhabit it?; what is the society like?; religions?; technology and magic?.
Do you need a big bad? Not necessarily, especially not at first. I try to anticipate all the questions players may ask about the world and its inhabitants and drawing on memories of everything I have read, watched heard about or imagined, I work toward a mental picture of this bold, new world, this "sandbox". I listen to the players and try to incorporate what they are interested in. 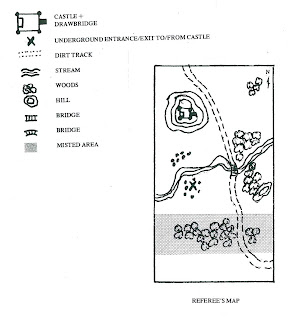 Do not dump all this information on the players in the form of a long monologue or pregame document for them to read. Let the world information flow naturally as the players explore and ask questions. That is part of the sandbox experience - discovery! Instead, put a small map in front of them. The above image is a tactical map lifted from The Strategic Review (v1 no5) and shows a castle, small village, underground entrance/exit and an unexplained misty area. There is lots here to explore, should the players wish.
I like to start with a village, partly because there are NPCs to interact with and learn from in a village and partly to establish a relatively safe home-base, should the players desire one. Describe what they see, what kind of day it is, etc. Reveal to the players a few rumors including information leading to two or three adventures you have semi-prepared. Let them learn about one or two "good" deities that have local worshipers and perhaps the existence of one "evil" deity and one or two "monster" types that may pose a threat.
Conflicts are fuel for adventure and a good sandbox needs at least two or three factions that are in conflict. The presence of factions may offer the player characters certain opportunities. It's always up to them in a sandbox. Encourage the players to be creative. Once they have become acquainted with the new sandbox, ask them what they want to do. In a sandbox, the players often lead, the referee follows. It may be helpful, especially for players to whom the sandbox style game is new, for the referee to offer a starting encounter/ adventure, just to get things moving. And remember those rumors, wanted posters and job notices.
Posted by Fred Daniel at 6:48 AM