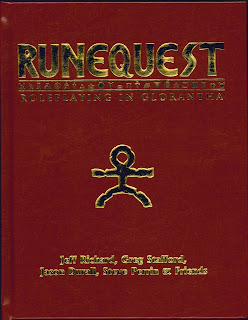 Roleplaying in Glorantha
The latest offering in the RuneQuest line of roleplaying games is variously known as RuneQuest 7e (following The Design Mechanism's RuneQuest 6), RuneQuest 4e (following Chaosium/Avalon Hill's RuneQuest 3) or RuneQuest: Roleplaying in Glorantha. Whatever you call it, this is a very impressive book. The art, binding and writing is all first rate. I would say it is the most attractive book I own.
Looks are great, but the real value goes deeper than appearances.
The content of RuneQuest: Roleplaying in Glorantha is up to the standards set by its appearance. The text is clearly written and serves to not only cover how to play RuneQuest, but also serves as a great introduction to Glorantha, perhaps the richest and most rewarding game setting ever devised. Glorantha predates RuneQuest 1e and is the creation of Greg Stafford, founder of The Chaosium and one of the original pioneers in our hobby. Mr. Stafford had already published two boardgames set in Glorantha prior to the original edition of RuneQuest, his original RPG for Glorantha. RuneQuest 1e broke away from character classes and introduced many a gamer, myself included, to skill-based roleplaying using percentile dice. The RuneQuest system became the basis for Chaosium's Basic RolePlaying which itself has been the engine for many fine games that Chaosium has published over the decades including Call of Cthulhu and Stormbringer.
Although this isn't the only volume you will want if roleplaying in Glorantha is really your goal (there is no bestiary, no referee's guide or world guide/atlas included - those products are sold separately), it is an excellent players' handbook for RuneQuest and introduction to Glorantha. Lead author Jeff Richard and his team have done an excellent job bringing a new vision of the RuneQuest system to print. One of the stated goals Mr. Richard and company had was to build upon Chaosium's popular RuneQuest 2 system in a way such that older products for that edition, which are now back in print or available in digital format, would remain compatible. They seem to have accomplished that goal and many more while bringing a modern feel to an old classic. As a player with 35+ years experience with all the published versions of RuneQuest, I am very pleased with this edition and consider it the best to date. It loses nothing and adds a significant value to the game in terms of playability and immersion.
This book literally pulls you into Glorantha. The system and setting are intertwined so that by the time you have created your characters, the players have entered Glorantha and are starting to think in terms of its bronze-age heroic time of gods and goddesses who are active in character's lives. The many beautiful illustrations help us to imagine this unique world, so different from our own, and the game mechanics link each character to the mythology and magic of Glorantha through the power of  the runes.
I refer to this as Jeff Richard's RuneQuest because it has a different feel from previous editions of RuneQuest. (RQ 2 was Steve Perrin's game. Glorantha is Greg Stafford's world.) Whether it is the intent of the design team or due to the personal touch of Mr. Richard himself, this book takes me deeper into Glorantha than I have ever gone. There is no sense of observing something from afar, no "just touching the surface" here. Roleplaying in Glorantha pulls me in and surrounds me with the magic that is Glorantha. I believe the excellent way the writing blends together rules and setting (and makes it all believable), the illustrations and the innate power of Glorantha as a setting are all working together in this book to achieve the RuneQuest experience.
Posted by Fred Daniel at 9:20 AM